Liquid Vídeo is an instllation created in 2004.

Liquid Video is a piece that came about as a result of working with pixels in the way I described above. It is, at the same time, a modest example of something that is also related to the last piece that I will present within this text: the concept of emergence, which describes complex phenomena generated by repeating simple rules and processes [1].

In fact, Liquid Video isn’t really an interactive work. The term ‘reactive’ doesn’t define it correctly either. The most appropriate term to describe it would be that of a live painting, or a mirror. It is a work that converses with its environment [2] regardless of whether the environment contains a human presence or not. In this way, the viewer can choose whether to participate in the constant creation of the image that develops within it or not. If he does, he has to adapt to the rules and rhythm of the piece, as its process will continue regardless of the image being read by the camera.

The installation works as a continuous loop; a coming and going between two states that can be defined, from their appearance, as liquid and drying states. The piece consists of a projection screen and a video camera that feeds the system with the images it works with. In this way, always using images from the video, the first state presents the visitor with a reflection that is increasingly distorted. The colours smear along the digital canvas as if a ‘water effect’ had been applied to them until shapes are unrecognisable, and the only recognisable features that remain are the actual colours of the environment and the viewer. 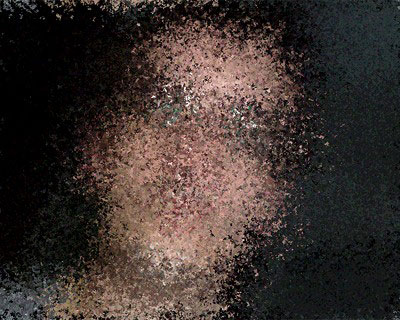 At this point, the system enters the drying state, and the image from the video gradually pulls itself together again. The colours slowly return to their original place, but leave small traces and strokes behind them along the way. In this way, the resulting effect is similar to that of a painting drying, which is created by using the image of the mirror that emulates the video. Just when the image begins to look like a simple replica of what we would see through a conventional video, the process of the water begins again. 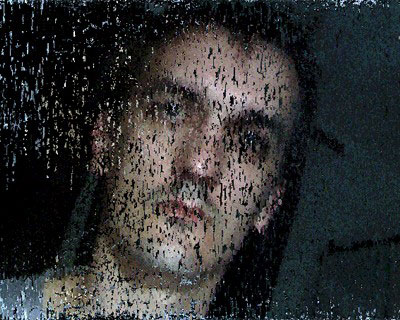 The process that creates these two effects is actually extremely simple. The system is only reading a limited number of pixels that make up the image of the original video (just 10,000 out of a total of 307,200), but instead of painting them where it should, it places them on a point that is generated by a basic programming concept: the Random Walker.

The Random Walker is nothing other than an element whose position is constantly moving up or down, or right or left, randomly. It is a typical exercise in introductory programming courses. This is therefore the foundation of the piece: to read pixels in one place and paint them in another. What is meant by reading and painting is the reading of colour information of a point in the video, and the drawing of this very colour on another point, keeping in mind only two rules: it should not be painted in a completely arbitrary place; a random walk would be used starting from the point where the original colour was read, and that not all the pixels should be painted, only a small amount. The only change from one state to the other lies in a slight tendency of the random walk to take the points back to their original position, where they constantly read their colour value. The fact that not all of the pixels change allows for the drying effect to emerge, which is nothing other than the traces of colour that a pixel leaves behind when it returns to its original position.

So, they are simple rules that generate far more complex results than might be expected from the mere analysis of rules, at least from an aesthetic point of view. Which is why the concept of emergence was mentioned earlier, as that is how the drying state came about. It wasn’t a planned or sought after effect, it came about when the highly simple rules that underlie the piece’s programming were carried out, with small variations from the liquid state.

The result is a painting in a state of continuous movement that imposes its rhythm on the viewer, or, rather, its surroundings. When placed before an urban landscape, it turns into an interpretation of it that reminds us of how painterly what is occurring before the camera actually is. The installation was up for a few months in Manhattan, pointing at the crossroads between Broadway and Waverly Place. By night, the taxis’ headlights would leave white and red traces on yellow. The passersby, mostly without knowing, also added some colour to the composition, and the newspaper stands would appear and fade away continuously.

Within other environments, Liquid Video can be an intimate mirror that plays with one’s own image, slowly drawing out and blurring one’s features. Leaving traces behind and evoking multiple metaphors about life and the passing of time.

1. For a general explanation of the concept of emergence applied to the digital arts, and to consult a list of references, see Citation: Soler-Adillon, Joan (2010). “Emergence and interactivity: A-Life Art as a paradigm for the creation of experiences in interactive communication”. Hipertext.net, 8, http://www.upf.edu/hipertextnet/en/numero-8/a-life_art.html. See also Soler-Adillon, Joan (2011). “Creating Black Boxes: Emergence in Interactive Art”. ISEA 2011 Proceedings: http://isea2011.sabanciuniv.edu/paper/creating-black-boxes-emergence-interactive-art

2. The artist Jim Campbell proposed the idea of a dialogue between interactive work and its environment in an article from the year 2.000: Campbell, J. (2000). Delusions of Dialogue: Control and Choice in Interactive art. Leonardo, 33, 133—136.