On Beauty is an interactive instllation created in 2004.

On Beauty is the third and last piece of this first series. It is a proposal that asks for the viewer’s participation in a more direct way, and, in this sense, is a more conventional interactive installation. Following on from previous works, On Beauty presents a space with a white screen to the viewer, which is surrounded by the subtle projection of an image that is being processed from a life feed of a camera placed behind the user. Next to the screen, the viewer will find a paintbrush with a small built-in light. By moving this paintbrush towards the screen, he will see how a still image unveils, following his movements. This image is worked on through algorithms that are similar to those used in Painted to present a real image in an almost painterly in a sense, embellished, style. In this way, the viewer finds himself in a technologically advanced environment (a plasma screen. a projection. a modified paintbrush …) and some images that are, at first sight, just pretty images.

The surprise lies in the content of the images, which is revealed by moving the paintbrush. These contain images of children and adults injured at war, and of victims of police abuse. Images that represent social injustice in places that are far from advanced societies, where the heavy presence of technology is often sustained by different conditions in other parts of the world. 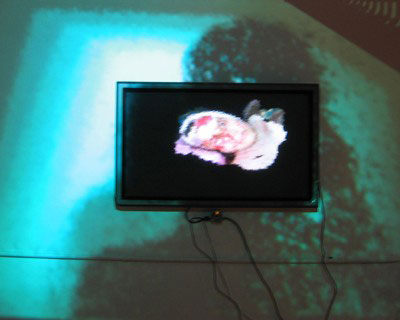 Hence the name of the piece: On Beauty is a modest claim, a small outcry against the unquestioned acceptance of technology’s pre-eminence in advanced society, which often goes hand in hand with opulence; the unnecessary and unbridled consumption of products that have been fabricated under conditions that we would find, in theory, unacceptable.

In fact, there was a clear element of provocation within the work, and the question of whether it might be too risky a piece, whether it might anger some viewers upon realising that they were painting injured children, was raised. The fact is that throughout the two days of the initial presentation, not a single user appeared to bat an eyelid. Many didn’t even realise what the image they were revealing actually represented, perhaps because they were not looking for a figurative image within it. Perhaps, also, we are already immune to this sort of images.

On Beauty concluded this small trilogy, which was based on the handling of real images. This third piece, which was different to the first two works in terms of presentation, also opened the door to proposing a greater implication from the viewer. All of this influenced the fourth and final piece presented in this text.