Painted is an interactive instllation created in 2004.

Painted was made after Liquid Video, and, in some way, can be understood as an evolution of the latter towards something that is actually an interactive installation. Painted was strongly inspired by works such as Daniel Shiffman’s Swarm and Rozin’s mirrors.

Just like in the previous piece, this work is a digital painting thattries to converse with its environment, but in this case it also starts up a dialogue with the viewers; in fact, Painted only converses with its environment when it detects movement – a symbol of life, or at least of activity – within it. Similarly to the way a work of art does not exist without eyes to look at it, this work only exists with the presence and movement of the viewer’s body. If nothing happens in front of it, nothing within Painted changes. If something moves, a section of the image will change so that it becomes impossible to come close to the work without altering it. It is therefore a work that constantly looks for change in order to respond to it. This is the dialogue it offers. If nothing happens and nobody moves, the piece also remains inactive.

This work, just like Liquid Video, uses pixels as its raw material and video as a source of information. It also never updates a frame completely. In Painted, only a small section is updated (changed) at a time, based on a specific point. In fact, it uses the point, or one of the points, where movement is detected, so that the viewer is also subject to the rhythm of the piece.

Each section is repainted radially, from the interior to the exterior, as if it were a centrifugal explosion of digital paint. Furthermore – just like in Liquid Video -, in the redrawn area, not all the pixels are updated, some are, some are not (once again, randomness is used). This gives the painting a sort of pointillist appearance that makes it more interesting. 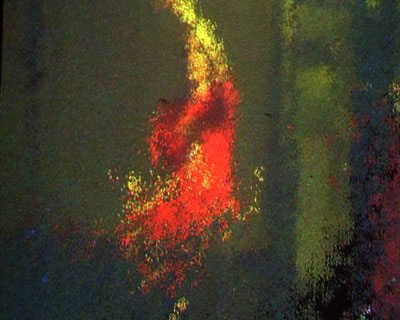 The fact that only a single point can change the image at any given moment also allows the user to only leave behind mere traces of his presence. The video that is at the foundation of it all therefore remains in the background after creating an almost painterly image. Consequently, this is a piece that continuously looks for change and movement, and only acts when it detects it. Just like Liquid Video, Painted is a piece that demands the same space of a conventional painting, but also offers interaction. Its ideal situation could be an art gallery, but also the lobby of a busy space or even a street, as I already described above.

The piece has an aesthetic value, as its presentation offers a sort of image that is much closer to the art of painting than that of television. It is simply an invitation to look. But it also invites participation and dialogue. If the viewer so desires, he can, on his own or in a group, play with the making of the image. The rules are simple enough to learn, or to sense, quickly, and the result is elaborate enough for time to extend through an act of exploration, which is in fact a participation in the very creation of the piece.